A couple of John Jay alumni ran some long standing St. Patrick’s Day events. Mike Lish, Class of ’94, ran Chicago’s  Shamrock Shuffle – the worlds largest 8K. Mike says he’s in average shape, which isn’t bad for a guy with a full time job and three kids. It was his first race in “Vibram Five Fingers” so he ran a little cautiously, finishing in 34:39. His goal for the Chicago summer 5K circuit is to break 20-minutes. Mike and his wife are going to alternate racing and kid duty so that they will both be able to race.

The interesting news from Mike is not about his racing. It’s about his poker prowess. Mike recently qualified for the World Series of Poker (main event), which will be held this summer. Maybe we will catch him on ESPN.

Dan Jordy, who is running for the very competitive Willow Street team in Albany, ran the “Running of the Green” 4-mile. Dan finished in 6th place with a sterling time of 20:56. Dan is going to be running in the upcoming Penn Relays. He didn’t say in what event. One of Dan’s best high school races was the 4 x 800 meter relay at Penn. His 800-meter split of 1:57 helped the team to a 2nd place finish in the Large School Race and a spot in the “Championship of America” race the next day. 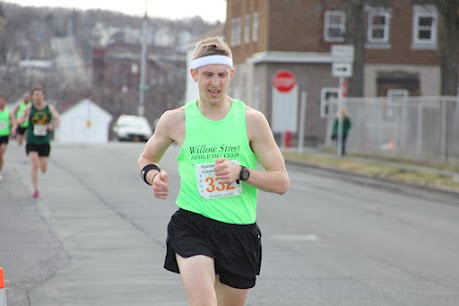